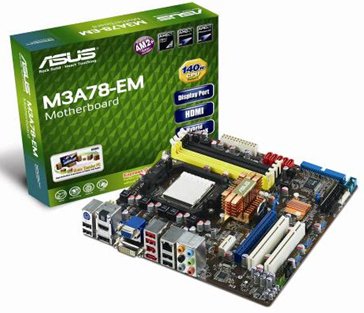 Asus has released the M3A78-EM and M3A78 PRO motherboards, both models are based on the AMD 780G chipset and support Hybrid CrossFireX. One of the special features of the motherboard is Express Gate, a web-enabled instant-boot environment.

Catering to users who are looking for a powerful device to create an excellent home entertainment environment, ASUS, worldwide leader in motherboard production, has released the new ASUS M3A78 series. The new ASUS M3A78 series utilizes the AMD platform, and is equipped with exceptional support for analog/digital outputs – enabling the PC to be utilized as a home theater in the living room, and not just a computing tool in the study or bedroom. The M3A78-EM also comes with DisplayPort, a cutting-edge digital output ready for users to upgrade their monitors in the near future. Moreover, the M3A78 Series adopts an advanced new power design to support 140W powered CPUs – providing users with more flexible choices on CPU upgrades.

Multiple VGA Output Interfaces and DisplayPort
The ASUS M3A78 series provides the principal criteria to make it the centerpiece of any home theatre product – multiple VGA output interfaces. With RGB, DVI and HDMI output interface, users will do away with connecting numerous convertors for different monitors. Users will also enjoy the flexibility of monitor upgrades without worrying about different interface support.

Latching onto the latest trend, the M3A78-EM is also designed with the DisplayPort interface. The advantages of DisplayPort include delivering higher performance and improving digital display connectivity; while even more cutting-edge DisplayPort enhancements are already underway to facilitate digital applications. With the M3A78-EM, users can be one step closer to the latest, more enjoyable forefront of the digital entertainment world.