Posted on Sunday, Jun 15 2008 @ 03:15 CEST by Thomas De Maesschalck
FUD Zilla published pictures of the ATI XGP connector which will be used to connect an external graphics card to a notebook. The site claims ATI has exclusive rights to this technology for 1 year.

AMD claims exclusive rights to the cable and connector technology for 1 year and it promises the cable itself will be cheap. The connector measures 32.3 x 12.2 x 6.1mm and will probably end up being the biggest connector on most laptops. It's still rather small, considering what it's intended to do and the bandwidth needed for external graphics.

The XGP cable can be between 0.5 and 2 meters long and it's diameter is 7.3mm. It has a latch mechanism and AMD thinks in can take as many as 10000 insertions, which should be more than enough for anyone. 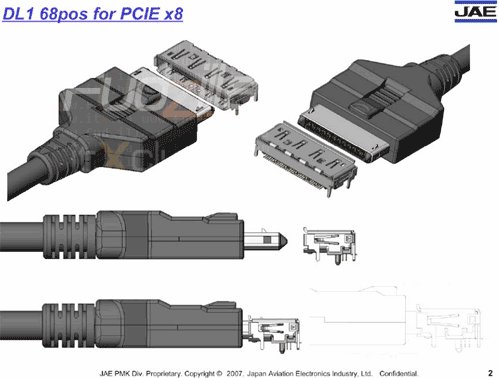