Posted on Monday, Jun 16 2008 @ 22:46 CEST by Thomas De Maesschalck
Besides the GeForce GTX 200 series NVIDIA also introduced the Tesla 10 series for GPU computing. There are two products, the Tesla C1060 Computing Processor which slides into a PCI Express x16 slot and for those who need more processing power there's the Tesla S1070 1U form factor rack that features four Tesla chips. One of the most important new features here is the support for 64-bit double-precision floating point calculations which makes these cards more attractive for GPGPU applications like scientific computing.

The Tesla C1060 has one T10P chip and just like the GeForce GTX 280 for consumers it features 240 cores. The card features a 512-bit memory bus and has 4GB 800MHz GDDR3 memory to deliver a peak memory bandwidth of 102GB/s. The core is clocked at 1.33GHz and the card has a typical power consumption of 160W. The card will be available in August and just like ATI's new FireStream 9250 it delivers 1 teraFLOPS of computing power which is twice as much as the Tesla 8-series. 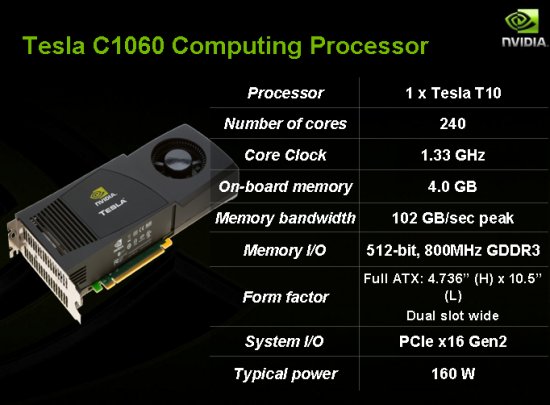 The Tesla S1070 1U computing system and Tesla C1060 computing processor board will be available for purchase for $7999 and $1699 respectively. These products are sampling today and will ship in August 2008.