Legit Reviews has published a pretty indepth review of the ATI Radeon HD 4850 and NVIDIA GeForce 9800 GTX+. The site benched both cards in 10 games and 3 synthetic applications and also took the time to compare power consumption, temperatures and overclocking.

The conclusion is both AMD and NVIDIA have launched very competitive cards at an affordable price level. If money is an issue the Radeon HD 4850 will do fine but if you can spare $30 bucks more the GeForce 9800 GTX+ will offer better performance, more overclocking room, PhysX support and CUDA.

The other downside to the GeForce 9800 GTX+ is that you can't buy it now as you'll have to wait until July 2008 to get one. The good news is that NVIDIA has made the move to 55nm and it looks like they pulled it off. The thermal temperatures were looking good and the power consumption levels are down from the previous 65nm generation. The ace that NVIDIA has is PhysX support starting right now. ATI of course has support with HAVOK, but where are the drivers? For an extra $30 consumers can go with the GeForce 9800 GTX+ and get more performance, PhysX game support and run more CPU computing applications or run the faster (BadaBoom and Folding@home). 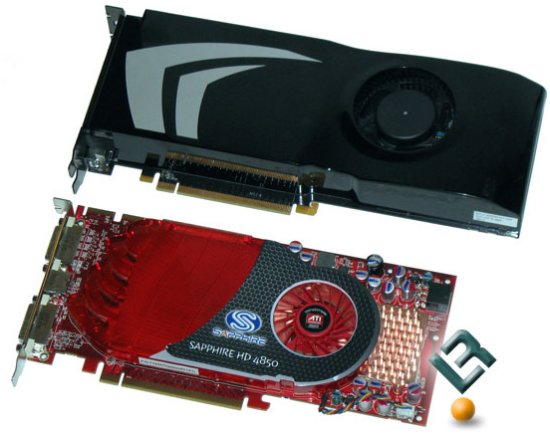 You can read the full article over here.