Posted on Monday, Jul 07 2008 @ 22:46 CEST by Thomas De Maesschalck
The guys from Tom's Hardware had a chance to play with a Intel Nehalem system with a Foxconn X58 chipset based motherboard. Nehalem will be Intel's first processor to support the QuickPath interface and Tom's Hardware writes the 20-bit wide QuickPath link will (theoretically) offer 25.6GB/s of bandwidth - that's twice as much as the 1600MHz FSB offers on the X48 platform:

Intel will launch the X58 chipset with the same ICH-10 family of southbridges currently used on its P45 platform. ICH-10 supplies up to four PCI Express x16 paths, of which two, are PCI Express 2.0 paths. Other possible combinations are: one x16 path, two x16 paths, four x8 paths, and one 16 path and two x8 paths.Because of QuickPath however, we’re able to realize far better performance with wide bandwidth and very low latency. According to Intel, Nehalem will initially come with a 20-bit wide 25.6 GB/sec. QuickPath link, which gives a theoretical 2x performance increase in bandwidth over the 1600MHz FSB currently available on the X48 platform.

Nehalem will support 800MHz, 1066MHz and 1333MHz DDR3 memory with a total bandwidth of 32GB/s. Motherboards with the X58 will have up to six memory slots for a total of 24GB DDR3 memory. The first Nehalem processors for the very high-end market will be available in the fourth quarter of this year with 2.66GHz, 2.93GHz and 3.2GHz frequencies. 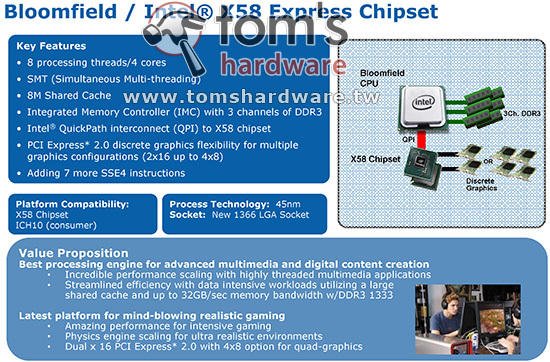 The Nehalem system Tom's Hardware got in their hands featured a Foxconn Renaissance X58 motherboard and a 2.93GHz Nehalem processor. They did a couple of tests and conclude the system easily clocks a lot higher than 2.93GHz. Here's a quick overview of the motherboard's features:

On hand today, we have Foxconn’s Renaissance X58 motherboard. Foxconn’s board will be the a reference board for many others, with minor differences here and there. On the board, we find the X58 MCH and the ICH10-R south bridge. Power connections include a standard ATX connector as well as an 8-pin CPU power connector.

Other features of the board are ultra-low resistance, crystal, ferrite salt-core inductors, and solid ultra-low SR capacitors. This board in particular uses a six-phase power circuit design but we can expect other manufacturers to introduce variances in the power department.

The two blue PCIe slots on this board indicate that the slots are PCIe x16 2.0. There are also two black x16 1.0 slots. Other features include an Intelsil ISL6336 power management chip which supports the 6-phase switch power design, 2 FireWire IEEE 1394a ports provided by a TI TSB434B22A chip, and a Broadcom BCM5786KMLG chip for Gig-e support. Realtek’s ALC888S audio codec supports full 7.1 discrete analog output and optional Dolby Digital Live, DTS Connect, and Dolby Home Theater for real-time encoding of audio signals to an external processor or receiver.

The board also features vertical SATA connectors, although many manufacturers are now featuring angled slots for better cabling. Debugging LED lights Light-emitting diode and a clear CMOS button round out the rest of the board. 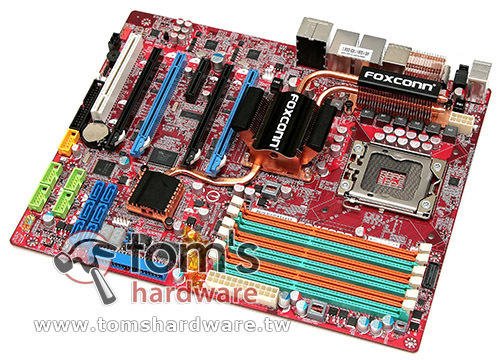 You can check it out over here. Unfortunately Tom's Hardware is under NDA so they weren't allowed to publish benchmark results.