Posted on Wednesday, August 06 2008 @ 1:10 CEST by Thomas De Maesschalck
A leaked slide unveils Intel is planning to release its Ibex Peak chipsets for the Lynnfield and Havendale processors in August or September of 2009. Expreview reports Intel is working on four Ibex Peak platforms: Kings Creek for desktop users, Calpella for notebooks, Piketon for enterprise users and Foxhollow for workstation and server applications.

One of the interesting things is that Ibex Peak may feature 64-lane PCI Express:

Intel will add a new “Configuration Feature” for Ibex Peak. the feature can configure processor based on different product combinations. I think this feature is built for capabilities with Lynnfield and Havendale. Lynnfield is a Quad core CPU and Havendale is a Dual core with Graphic core built in, so they need different configuration to suit, but no more word for this “Configuration Feature” so we don’t know it is only a stuff that can help board partners to design mobos or a new BIOS feature.

Other than that, from the summary chart we can see Ibex Peak has as much as 64 lane for PCIe slot! FYI X58 only got 32X for graphic. Since it is still in early stage so we don’t know if they will apply all 64 lane to graphic slot but that is a insane number after all. 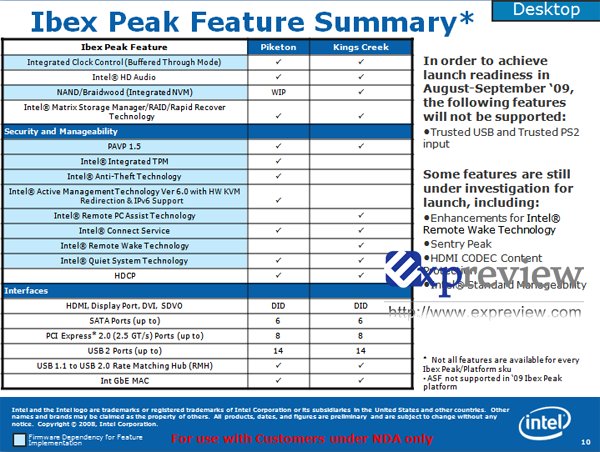