The babes of Red Alert 3

These names will probably not ring a bell but Gina Carano is an American mixed martial arts (MMA) fighter, this brunette will play Natasha in the Soviet campaign while blonde model Gemma Atkinson will act as Lt Eva McKenna, an Allied communications officer.

Making her videogame acting debut, Gemma, 23, will play Lt Eva McKenna, a character familiar to fans of Command & Conquer Red Alert 2. A military officer with a sexy twinkle in her eye and a British stiff upper lip, Eva is a communications officer for the Allied coalition in their fight against the Soviet and Rising Sun superpowers.

The game, which takes place in an alternate timeline and imagines what would have happened if time travel had been used by both Albert Einstein and the Soviet Union, features an epic global confrontation with you at the controls of your chosen faction.

Atkinson said: "I'm a gamer and the chance to act in one of the best loved game franchises was an opportunity I was really keen to explore - especially as Eva is such a strong female character. The worlds of gaming and film are getting ever closer and as an actress I wanted to explore this exciting new area of drama, broaden my acting skills and continue the active, outgoing side of my personality that I showed in I'm A Celebrity..." 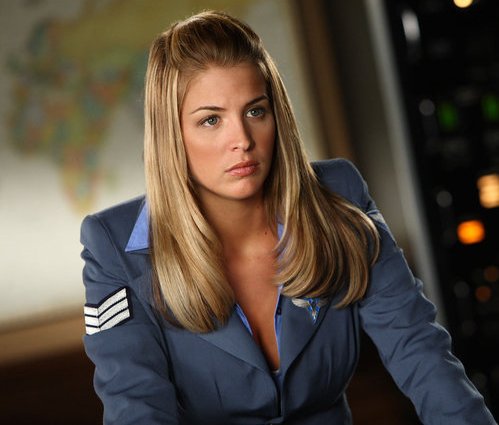 We also got a photo of Russian commando Natasha Volkova (Gina Carano) for you: