Posted on Thursday, Aug 07 2008 @ 01:51 CEST by Thomas De Maesschalck
FUD Zilla has some info and a photo of the upcoming GeForce 9300 based DFI MCP7A-U micro ATX motherboard.

Not only does this board have support for the latest Intel processors, but it also supports Hybrid SLI and simultaneous DVI and HDMI output. On top of that it has two PS/2 ports, four USB 2.0 ports, Gigabit Ethernet and 7.1-channel audio with optical and coaxial S/PDIF out.

Although this board has a pair of x16 PCIe slots, only one of them offer full functionality, as the second slot is really only a x2 slot due to chipset limitations and this board doesn't support SLI. It also has a single x1 PCIe slot and a PCI slot, as well as six angled SATA ports, an IDE connector, power and reset buttons and a Post 80 debug LED.

Still not satisfied? Well, how about some really great news for those that want a mATX SLI motherboard then, DFI is planning to bring out a motherboard based on the MCP7A-SLI chipset that will be based on a similar design to the Geforce 9300 model, but hopefully with some more space between the two x16 slots. This chipset will just like the P45 be limited to dual x8 in terms of bandwidth, but as it's using PCIe 2.0 you actually get the same bandwidth as in a full x16 PCIe 1.0 slot. 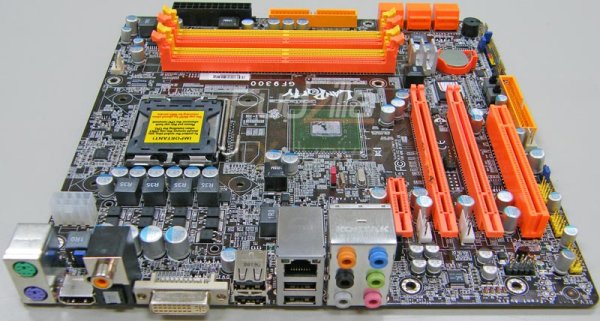