Posted on Saturday, Aug 09 2008 @ 20:13 CEST by Thomas De Maesschalck
Toshiba has released 32GB embedded NAND flash memory for digital consumer products such as phones, GPS systems, video cameras, HDTVs and set-top boxes. Samples will be available in September and mass production will be initiated in Q4 2008.

Toshiba offers a line-up of single-package embedded NAND Flash memories which include a controller to manage basic control functions for NAND applications: LBA-NAND™ memory, which has a NAND interface; eSD large capacity chips with SD interface; and e MMC with an HS-MMC interface. This comprehensive line-up, available in densities ranging from 1GB to 32GB, supports applications in a very wide range of products.

There is growing demand for memories with a controller function that minimizes development requirements and eases integration into system designs. Toshiba has already taken steps to secure leadership in this expanding market, and the addition of higher density modules will reinforce the company's position. 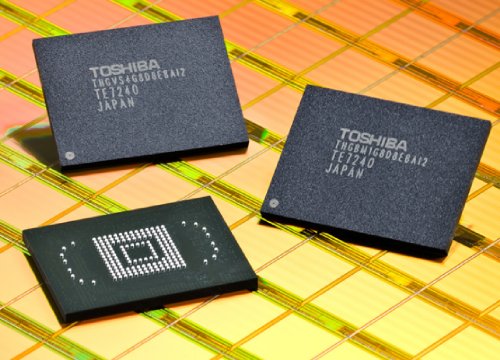