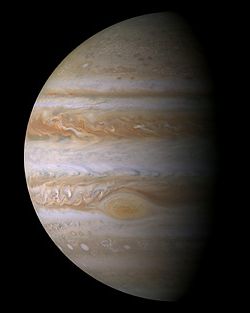 A new study by researchers at the University of California, Berkeley and London found that a strange, metal brew of metallic helium and metal hydrogen is produced at the center of giant gas planets like Jupiter and Saturn. On Earth helium is a a colorless, see-through, electrically insulating gas but under the extreme pressure found at the centers of Jupiter and Saturn the element turns into a liquid metal that resembles mercury.

The study, published in this week's online edition of the journal Proceedings of the National Academy of Sciences, demonstrates that metallic helium is less rare than was previously thought and is produced under the kinds of conditions present at the centers of giant, gaseous planets, mixing with metal hydrogen and forming a liquid metal alloy.

"This is a breakthrough in terms of our understanding of materials, and that's important because in order to understand the long-term evolution of planets, we need to know more about their properties deep down," said Raymond Jeanloz, professor of astronomy and of earth and planetary science at UC Berkeley and one of the authors of the study. "The finding is also interesting from the point of view of understanding why materials are the way they are, and what determines their stability and their physical and chemical properties."

Jeanloz studies pressures tens of millions of times greater than Earth's atmospheric pressure - the kinds of forces felt inside Jupiter and Saturn, so called "gas giants" that lack a solid surface. The core of the Earth, which is small and dense compared to the cores of these gas giants, contains pressures of about 3.5 million times atmospheric pressure. Pressures at Jupiter's core, for example, reach 70 million times Earth's atmospheric pressure, the planet's massive size more than offsetting its low density. The cores of Jupiter and Saturn are a balmy 10,000 to 20,000 degrees Celsius, two to four times hotter than the surface of the sun.

In this study, Jeanloz and Lars Stixrude, earth sciences professor at University College London, took a closer look at what happens to helium under such extreme conditions.