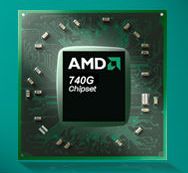 AMD recently released the 740G chipset and the launch of this chip went as good as unnoticed by most of the online computer community. This chip is a value part designed for cheap systems or low-power multimedia machines.

Some weeks ago AMD quietly introduced a new motherboard part without many people noticing. The 740G was not released to make some big waves as the previous 780G did, or the very new 790GX is doing. Instead the 740G is positioned as an extreme value part which brings quite a few nice features to the scene. The heart of the 740G is essentially the same as the previous 690G. The X700 based integrated part is SM 2.0 compliant, and it has the newer Avivo HD/UVD portion fused onto the design. All of this is then rolled up in one 55 nm package. The 690G broke new ground in terms of features and performance when it was released last year, but the design was shackled to the older SB600 southbridge which had its obvious I/O issues and relatively limited connectivity. The 740G is designed to overcome some of those limitations, as well as provide a fresh product for motherboard manufacturers to base inexpensive products around.