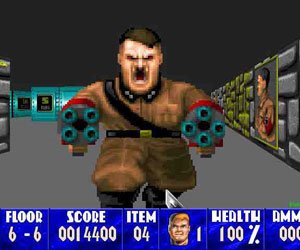 id Software art director Kevin Cloud told the press that Hitler won't make an appearance in the upcoming Wolfenstein game but he did hint that he might appear in future Wolfensteins:

The original Wolfenstein 3D was in a bit of a different age to the one we live in now - one where it was considered mostly OK to have a massive robotic Hitler wielding four miniguns as the end-game boss. Nowadays such things would be frowned on.

As such id Software has announced that in the latest Wolfenstein game, there will not be a Hitler boss character. Nazis, sure, but no Hitler. It isn't for the reasons above though id Software's art director Kevin Cloud cares nothing for the tastes and trends of society, he's just saving Hitler for use in the sequel.

"No, he's [Hitler's] not in our game. We've got to save something for future Wolfensteins," said Kevin in an interview with Eurogamer.