Posted on Tuesday, Aug 12 2008 @ 16:20 CEST by Thomas De Maesschalck
French computer site Canard PC published a bunch of information about Intel's plans for the future. One of the more interesting things is a roadmap of Intel's Tick Tock development model until 2012. Each tock is the introduction of a new architecture while each tick is the introduction of a smaller production process. Currently Intel is introducing the 45nm Nehalem "tock" and in 2009 you can expect a 32nm shrink of Nehalem codenamed Westmere.

A new architecture will arrive in 2010, that tock will introduce the 32nm Sandy Bridge. Most of you will probably already have heard about these upcoming processors but what's new here is the information about Intel's future 22nm processors. In 2011 you can expect the 22nm Ivy Bridge and one year later you can expect the new 22nm Haswell architecture. 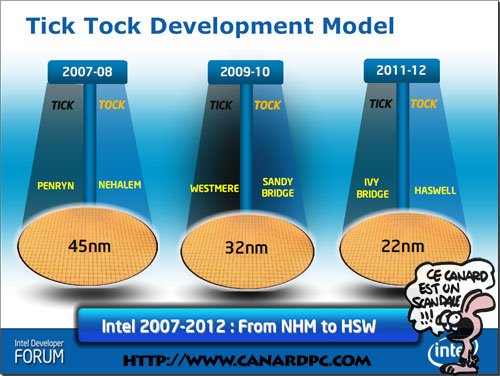 Sandy Bridge
This 32nm architecture will succeed the 45nm Nehalem architecture in 2010. Sandy Bridge (formerly also known as Gesher) will have up to eight cores on the same die, 512KB L2 cache and 16MB L3 cache. Also new is the addition of Instruction AVX (Advanced Vector Extensions) which might be as significant as the introduction of SSE in 1999. According to Intel the introduction of AVX will enhance the performance of certain matrix multiplication instructions by 90 percent.

Ivy Bridge
A 22nm shrink of Sandy Bridge. Little is known about this chip expect that it should arrive in 2011.

Haswell
This 22nm architecture is expected to replace the Sandy Bridge architecture in 2012. This architecture is still four years away from us but early information tells us that this processor architecture will have a native eight-core design, a whole new cache architecture, "revolutionary" energy saving technologies, the FMA (Fused Multiply-Add) instruction set and possibly on-package vector coprocessors.