Posted on Wednesday, Aug 13 2008 @ 23:48 CEST by Thomas De Maesschalck
Logitech introduced the V550 Nano notebook mouse. This cordless mouse features a very tiny USB receiver, a small clip-and-go dock to clip the mouse to your notebook and an astounding 18 months of battery life with 2 AA batteries!

Always ready for use, the V550 Nano also features the Plug-and-Forget Nano-receiver – it’s so small that once it’s plugged into your computer, you can forget about it. The Nano-receiver stays nearly flush against the side of the computer (protruding just 8 mm), so it doesn’t have to be unplugged when you stow your laptop.

With increased mobility comes increased concern about battery life. You don’t want to be caught out and about with a mouse that’s run out of power. The new V550 mouse offers up to 18 months of battery life and is the only Logitech cordless laser mouse currently offering this extended level of use. Plus, the V550 Nano saves additional power by automatically turning off when it’s docked or when the Nano-receiver is stored inside the mouse.

The V550 Nano is offered in two colors – gray with silver accents and silver with cool-blue accents. And with the purchase of the new Logitech mouse, you’ll receive two Clip-and-Go docks – one silver, one black. An included setup kit makes it easy to install the dock, and to remove it, if necessary. 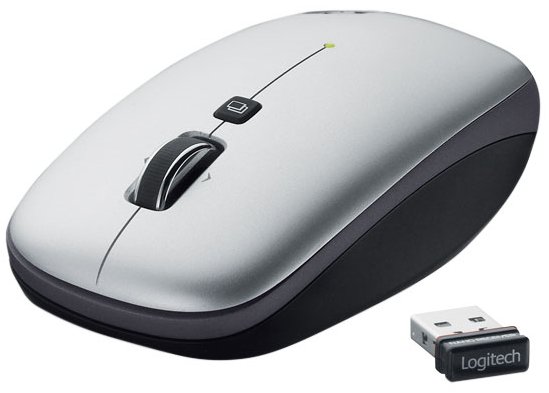