Posted on Friday, Aug 15 2008 @ 00:40 CEST by Thomas De Maesschalck
NVIDIA showed off at Siggraph today that Intel and AMD aren't the only ones who are experimenting with real-time ray-tracing. The green team ran a tech demo of a ray-traced Bugatti Veyron in a city on one of their upcoming Quadro Plex 2100 D4 systems which features two dual-GPU Quadro FX 4700 X2 graphics cards with 1GB of memory per GPU.

The GPU ray-tracer was demoed on these four GPUs at a resolution of 1920 x 1080 and ran at up to 30 frames per second. They used an image-based lighting paint shader and ray traced shadows, reflections and refractions. An important thing to note here though is that NVIDIA used only three bounces for their ray-tracing - to get truly photorealistic effects you need a lot more bounces so basically this demo once more confirms that ray-tracing isn't feasible yet.

During SIGGRAPH 2008 in Los Angeles NVIDIA is demonstrating a fully interactive GPU-based ray tracer. The demo is based purely on NVIDIA GPU technology, and according to NVIDIA the ray tracer shows linear scaling while rendering a complex, two-million polygon, anti-aliased automotive styling application. Screenshots from the actual demo are shown here.

At three bounces, performance is demonstrated at up to 30 frames per second (fps) at HD resolutions of 1920x1080 for an image-based lighting paint shader, ray traced shadows, reflections and refractions running on four next-generation Quadro GPUs in an NVIDIA Quadro Plex 2100 D4 Visual Computing System (VCS). Some of these screenshots, however, were taken with the resolution increased all the way up to 2560x1600. Frame rates at that resolution weren't available though. 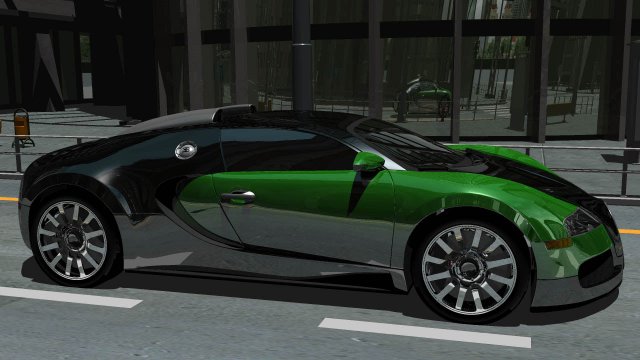 More details and high-res screencaps at HotHardware. According to NVIDIA this is world's first fully interactive GPU-based ray tracer.