It started after Aubrey and I built a motherboard collage to hang above my desk (see first row of images). Scott Hudson liked it so much, he asked us to produce several more for his lab (where a lot of electronics fabrication occurs). This kicked off a month-long motherboard buying extravaganza. By December, I had amassed about 150 lbs worth. Most were bulk lots purchased off ebay at an average cost of $1.35 per pound, including shipping cost (cheap!). Construction didn't start until after winter break. When Aubrey and I returned, we set aside two thursday afternoons. Each motherboard wall took approximately 6 hours to assemble . The longest step by far was laying them out. Not only did we try to distribute the colors in an interesting way, but dozens of different sized boards had to fit together perfectly and not overlap the edges. 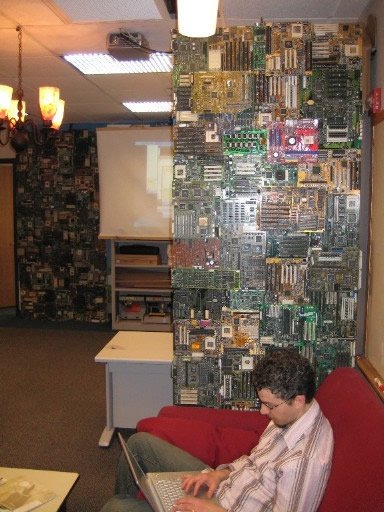