No dark matter in cosmic voids

Posted on Monday, Aug 18 2008 @ 00:54 CEST by Thomas De Maesschalck
A new study by researchers at the University of Chicago using data from the Sloan Digital Sky Survey II (SDSS-II) found that cosmic voids really are devoid of matter. The astronomers found that even "dark matter", which is believed to account for about 80 percent of the mass of the universe, is not present present in these vast empty regions of space which can be tens of millions of light-years across.

Cosmic voids really are devoid of matter. Astronomers have found that even the pervasive 'dark matter' which accounts for about 80% of the mass of the universe is not present in these voids, which are areas of vast emptiness in space that can be tens of millions of light-years across. "Astronomers have wondered for a quarter-century whether these voids were 'too big' or 'too empty' to be explained by gravity alone," said University of Chicago researcher Jeremy Tinker, who led the new study using data from the Sloan Digital Sky Survey II (SDSS-II). "Our analysis shows that the voids in these surveys are exactly as big and as empty as predicted by the 'standard' theory of the universe."

A central element of the standard cosmological theory is cold dark matter, which exerts gravity but does not emit light. Dark matter is smoothly distributed in the early universe, but over time gravity pulls it into filaments and clumps and empties out the spaces between them. Galaxies form when hydrogen and helium gas falls into collapsed dark matter clumps, referred to as "halos," where it can form luminous stars.

But astronomers were not sure if the areas that are devoid of galaxies were also devoid of dark matter, or if the dark matter was there, but for some reason stars just didn't form in these voids.

The research team used bright galaxies to trace the structure of dark matter and compared it with computer simulations to predict the number and sizes of voids. Princeton University graduate student Charlie Conroy measured the sizes of voids in the SDSS-II maps. "When we used galaxies brighter than the Milky Way to trace structure, the biggest empty voids we found were about 75 million light years across," said Conroy. "And the predictions from the simulations were bang-on." 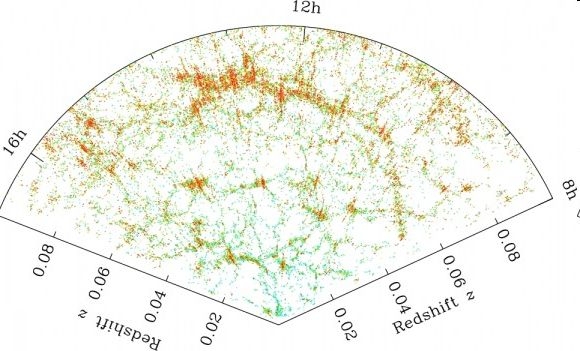