Posted on Tuesday, Aug 19 2008 @ 01:21 CEST by Thomas De Maesschalck
EA released the first details of Need for Speed Undercover. This is already the twelfth installment in the Need For Speed series and according to statements made by EA's CEO John Riccitiello it should be a new start for the series. EA created two Need for Speed teams which are each given a 24 month development cycle with future titles, alternating releases between them. Riccitiello claims Undercover will bring better gameplay and better innovations.

Black Box, a studio of Electronic Arts Inc. (NASDAQ:ERTS) today announced Need for Speed™ Undercover, the intense action racing title scheduled for release this holiday. The new game will feature international movie star, Maggie Q, as the lead character in the big-budget live-action sequences that propel the original story forward as players get behind the wheel. EA’s Need for Speed Undercover takes the franchise back to its roots and re-introduces break-neck cop chases, the world’s hottest cars and spectacular highway battles.

“Need for Speed Undercover features a deep and engaging story of spectacular Hollywood-style live-action that will transport players into the fictional world of the Tri-City Bay Area,” said Bill Harrison, Need for Speed Undercover Executive Producer. “Working with talent the caliber of Maggie Q allows us to deliver an unparalleled level of storytelling that will keep players engaged in between 180-mile an hour races.”

Maggie Q, who has starred in Mission Impossible III and Live Free or Die Hard, plays Federal Agent Chase Linh, a seductive handler who recruits and guides players as they go undercover. Players will take on dangerous jobs and compete in races in order to infiltrate and takedown a ruthless international crime syndicate.

“I’ve always been a fan of racing games and working on Need for Speed Undercover was an amazing experience,” said Maggie Q. “I was so impressed by the scope and quality of the overall production that goes into a videogame these days. It was like any other day on a Hollywood set; I felt right at home. The Black Box team is doing tremendous work here and I can’t wait to see the final game.”

Here's a shot of Maggie Q in Die Hard 4: 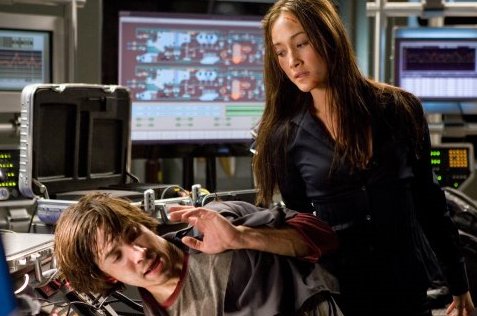