Posted on Tuesday, Aug 19 2008 @ 04:00 CEST by Thomas De Maesschalck
New data from the Sloan Digital Sky Survey (SDSS-II) unveils the halo of stars that envelops the Milky Way galaxy is like a river delta criss-crossed by stellar streams large and small.

While the largest rivers of this delta have been mapped out over the last decade, analysis of the new SDSS-II map shows that smaller streams can be found throughout the stellar halo, said Kevin Schlaufman, a graduate student at the University of California at Santa Cruz.

Schlaufman reported his results at an international symposium in Chicago, titled "The Sloan Digital Sky Survey: Asteroids to Cosmology."

Over the last three years, Schlaufmann explained, the SEGUE survey of SDSS-II has measured the motions of nearly a quarter million stars in selected areas of the sky. A careful search for groups of stars at the same velocity turned up 14 distinct structures, 11 of them previously unknown.

"Even with SEGUE, we are still only mapping a small fraction of the Galaxy," said Schlaufman, "so 14 streams in our data implies a huge number when we extrapolate to the rest of the Milky Way."

If each velocity structure were a separate stream, Schlaufman explained, there would be close to 1,000 in the inner 75,000 light years of the Galaxy. However, these structures could arise from a smaller number of streams that are seen many times in different places.

"A jumble of pasta" is the way Columbia University researcher Kathryn Johnston described her theoretical models of the Milky Way's stellar halo. In a review talk at the symposium, Johnston explained how dwarf galaxies that pass close to the Milky Way can be stretched by gravitational tides into spaghetti-like strands, which wind around the Galaxy as stars trace out the same orbital paths at different rates. 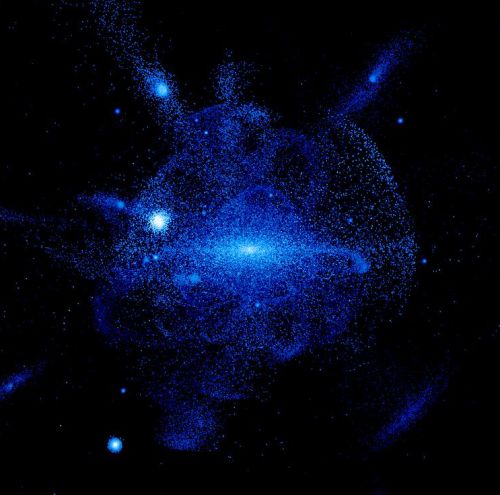