Posted on Tuesday, Aug 19 2008 @ 22:12 CEST by Thomas De Maesschalck
German computer site PC Games Hardware published a handful of pictures of the ASUS P6T Deluxe, this motherboard features the Intel X58 chipset and supports Intel's upcoming Core i7 "Nehalem" processors. This version does not have the NVIDIA nForce 200 chip which adds SLI support but this chip will be present on at least some Republic of Gamers (ROG) series motherboards.

Here's a press release from ASUS with more info about the P6T Deluxe. The motherboard features a 16-phase power design and SAS support.

With the release of the new Intel X58 platform imminent, ASUS has consolidated plans around the P6T Series of motherboards. Specifically designed to provide outstanding performance that caters to increasing user needs, the ASUS P6T Deluxe motherboard will fully embrace the new Intel platform; and touches on several significant changes in terms of key components like the CPU socket, chipset and DIMM channels. With such a big leap in terms of technology, the P6T Deluxe will be slated to provide faster bandwidth, storage and enhance overall performance – allowing users to look forward to experiencing extreme overclocking performance.

The Coming New Intel Platform
The first obvious change on the P6T Deluxe is the migration of the chipset to the new Intel X58+ICH10R. This successor to the X48 chipset features support for 36 lanes – making it possible for 4 PCI-E x16 slots to run at x8 modes. This chipset evolution will also match Intel’s new CPU generation – the Nehalem family, and allow users to utilize 1366-pin Bloomfield CPUs with core frequencies of 2.66GHz, 2.93GHz and 3.2GHz (the very first Nehalem members in market). The memory controller will be integrated to support 3-channel (6 DIMMs) DDR3 1333 for the CPU; while the L3 cache is expected to reach up to the 8MB mark. The new generation of CPUs will support memory of up to 24GB with a total bandwidth of 3200MB/s; and differing from the X48, this new platform exclusively supports DDR3. What’s even more exciting is the fact that this new platform will adopt a new system bus structure – QPI (QuickPath Interconnect) which supports up to 6.4GT/s (3.2GHz) and a max bandwidth of up to 25.6GB/s (twice the bandwidth compared to current FSB 1600 standards). With such high specification standards, the P6T Deluxe truly looks set to unleash the ultimate in performance for hardcore PC users.

SAS Support for Server-level Storage
To match the supreme performance of the new platform, the ASUS P6T Deluxe will adopt the SAS (Serial Attached SCSI) controller to let users utilize SAS hard disks. These hard disks will provide higher data transmission speeds and better data storage reliability in comparison to current SATA interfaces; and could herald the start of a new standard for mainstream storage devices that caters to enterprise users. With this technological improvement, users will be able to connect 2 SAS hard disks to the P6T Deluxe without the need to purchase an extra SAS controller card. Performance-wise, an SAS hard disk gains a 39% improvement on PC Mark HDD Test benchmarks when comparing RAID 0 performances with SATA (supported by SB ICH10R) interfaces.

P6T Deluxe with DTS Proprietary Algorithms for Clear, Immersive Audio
The P6T Deluxe, much like selected ASUS Home Theater PCs, will utilize DTS SURROUND SENSATION ULTRAPC TECHNOLOGY* with proprietary DTS algorithms to provide professional level surround and cinema sounds. Able to create a center and rear channels even on two speakers or headphones, the P6T Deluxe with DTS SURROUND SENSATION ULTRAPC TECHNOLOGY will allow the listener to perceive sounds as if surrounded by audio from all sides for a fully immersive audio experience.

The DTS proprietary algorithms include: Dialog Clarity, which solves the problem of unintelligible dialog usually found in home theater environments through enhanced signal clarity; LFE Mixing, which mixes existing bass channel content into left and right stereo channels to allows users to obtain superb bass effects – even on two speakers or just headphones; and Bass Enhancement, which improves bass performance by utilizing proprietary psychoacoustic techniques to restore the perception of fundamental low-frequency tones – without the additional hardware costs of adding a subwoofer. 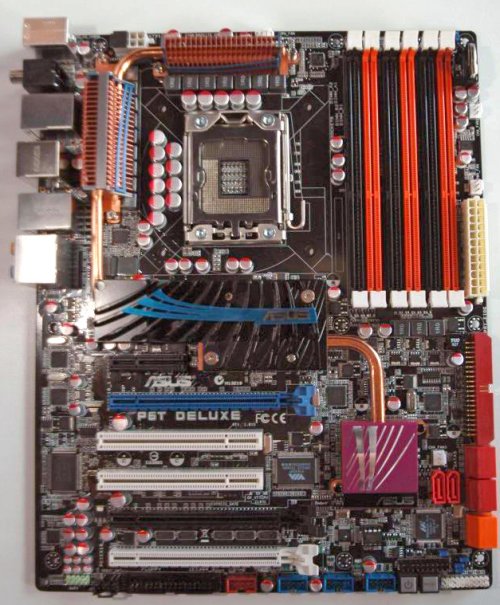