Posted on Wednesday, Aug 20 2008 @ 00:40 CEST by Thomas De Maesschalck
PC Perspective reports about LucidLogix's new HYDRA engine which is an exciting new multi-GPU technology that opens up a lot of new possibilities. HYDRA is basically a chip that "intelligently" redistributes graphics workloads across multiple GPUs in real-time.

Furthermore, this chip can also be incorporated into dual-GPU cards like the Radeon HD 4870 X2. One of the interesting things here is that Lucid claims HYDRA has nearly linear scaling on up to four GPUs! If true that's significantly better than the 50-70% scaling offered by SLI or CrossFire.

At its most basic level the HYDRA Engine is an attempt to build a completely GPU-independent graphics scaling technology - imagine having NVIDIA graphics cards from the GeForce 6600 to the GTX 280 working together with little to no software overhead with nearly linear performance scaling. HYDRA uses both software and hardware designed by Lucid to improve gaming performance seamlessly to the application and graphics cards themselves and uses dedicated hardware logic to balance graphics information between the CPU and GPUs.

Why does Lucid feel the traditional methods that NVIDIA and AMD/ATI have been implementing are not up to the challenge? The two primary multi-GPU rendering modes that both companies use are split frame rendering and alternate frame rendering. Lucid challenges that both have significant pitfalls that their HYDRA Engine technology can correct. For split frame rendering the down side is the need for all GPUs to replicate ALL the texture and geometry data and thus memory bandwidth and geometry shader limitations of a single GPU remain. For alternate frame rendering the drawback is latency introduced by alternating frames between X GPUs and latency required for inter-frame dependency resolution.

The first HYDRA implementations are expected in 2009. 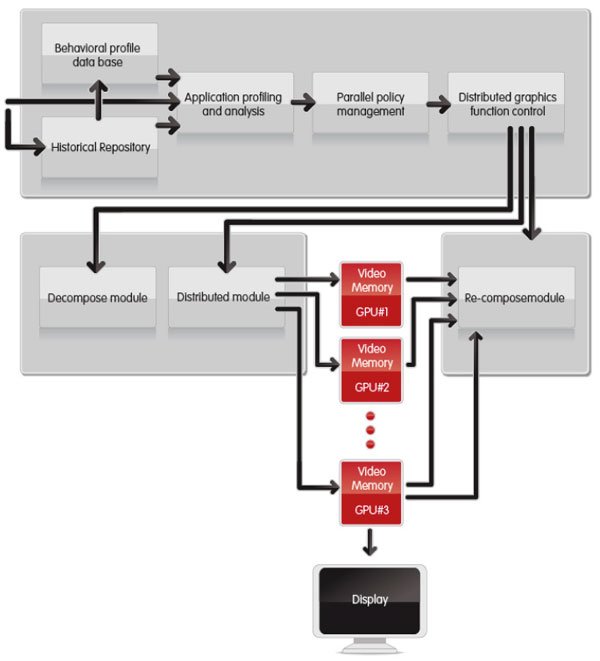