For hardware that’s over two years old, AGEIA’s PhysX card was able to put up a much stronger showing than we expected, but it still wasn’t able to match the performance of today’s GeForce 8800 GT and 9800 GTX cards. In UT3 for instance the 8800 GT was 16% faster than the PPU (the closest example was Warmonger at 12%). And keep in mind that the GeForce cards we tested were running a mixture of 3D and PhysX, while the PPU is dedicated solely to PhysX calculations. In the original PhysX performance article we saw some pretty nice gains in Warmonger and UT3 when one GeForce 9600 GT card was devoted entirely to running PhysX. 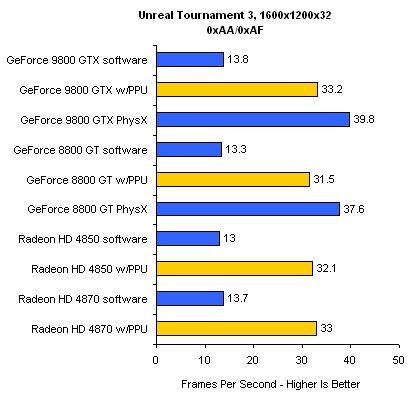