Earlier this week Intel showed off a wireless power transmission system at the Intel Developer Forum. Wireless power transfer is not something new, Nikola Tesla demonstrated this feat almost 120 years ago, but now Intel has plans to use the technology to power portable devices. The system that was demonstrated by Intel could send 60W of power at 75 percent efficiency up to 3 feet.

Justin Rattner, Intel’s chief technology officer describes, "Something like this technology could be embedded in tables and work surfaces, so as soon as you put down an appropriately equipped device it would immediately begin drawing power."

A computer-powering desk is just what Intel is cooking up in fact. It says a desk with embedded transmission equipment could power laptops and eliminate the need for messy cables and proprietary connectors.

The new tech was first developed by Massachusetts Institute of Technology physicist Marin Soljacic. Professor Soljacic came up with the idea of transmitting wireless power via resonant magnetic fields. He calls the invention WiTricity, a blend of the words wireless and electricity. The work relies heavily on the electric concept of induction. Induction is already used commercially on a limited scale, to recharge certain powered toothbrushes.

Intel helped improve upon MIT's design, bringing the efficiency up from 50 percent to 75 percent. Internally, Intel is speculating that the device may permit and work with the shift from batteries to supercapacitors. While currently more expensive, supercapacitors could allow faster recharging. Mr. Rattner states, "In the future, your kitchen counters might do it. You’d just drop your espresso maker down on them and you would never have to plug it in." 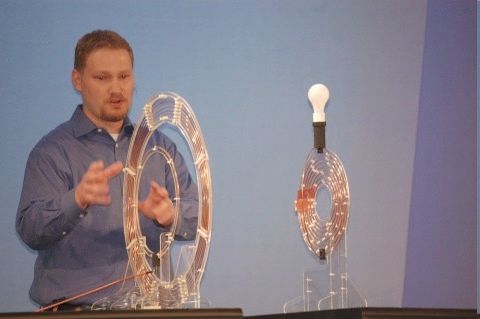