Posted on Monday, Aug 25 2008 @ 14:37 CEST by Thomas De Maesschalck
Today is the start of NVIDIA's big week, from August 25 to August 27 the graphics card maker will hold a new visual computing mega-event in San Jose. NVIDIA says NVISION will be over 55 hours of jaw-dropping visual wonderment - from today's hottest games and movies, video, science, mobile and computer technologies - you will get to experience, touch and feel the latest visual technologies that will change your life. And let you see into the future.

NVISION will kick off later today but some sites have already published some pre-show coverage.

NVISION 08 is a first-of-its-kind mega-event that has been designed to take attendees behind the scenes of the visual revolution. Legit Reviews is already at the show to bring you coverage, so we headed over to the venue and took a peak at what the show will be like. If you happen to have some free time this week you should consider checking out the event. General admission is only $10 to get in and registration is still open. "The picture shown above with the big screen TV and the PC game title Race Driver GRID is part of the 3D Stereovision Demo that will be shown during the event. This demo shows off the new stereoscopic 3D hardware and software that has never been shown publicly before. You can play some of the hottest new games with new 3D glasses that are sycn'd with brand new Mitsubishi and View Sonic LCD displays. We took a second to try out GRID and found it to be really fun and the 3D glasses worked great and were much nicer than ones we have seen over the past year..." 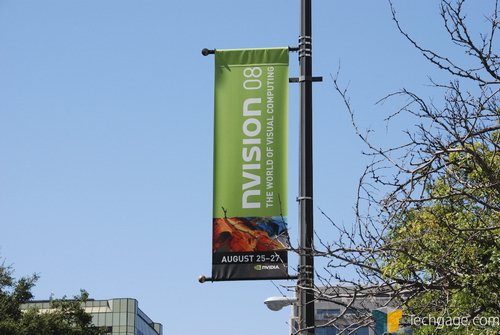 We're in sunny San Jose where NVIDIA's mega-event, NVISION 08, will soon be in full effect. The event is bringing gamers and developers from all over the world to create what NVIDIA hopes to be the first true visual computing convention. We stepped behind the scenes before the official opening to see how things are being set up.