The EOS 50D Digital SLR camera's 15.1-megapixel CMOS APS-C size image sensor has been improved thanks to the use of newly designed gapless microlenses over each pixel to reduce noise and expand sensitivity up to ISO 12800. The faster processing speed of the camera's DIGIC 4 image processor contributes to the fast 6.3 frame-per-second (fps) continuous shooting capability (for bursts of up to 90 Large/Fine JPEGs or 16 RAW images on a UDMA CF card), to give shooters the tools they need to capture that perfect moment in perfect clarity.

The Canon EOS 50D camera provides ISO speeds from ISO 100 up to ISO 3200 in 1/3-stop increments, along with two high-speed settings - H1 and H2 - of ISO 6400 and ISO 12800, respectively. Along with a wide ISO range, Canon gives shooters more tools to help maximize clarity and color. The EOS 50D Digital SLR camera offers multiple levels of noise reduction during high-speed shooting. Users can choose from one of four settings- Standard/Weak/Strong/None - to help reduce digital noise that can result from poor lighting conditions.

As part of the camera's internal image processing, the Canon EOS 50D Digital SLR camera conducts peripheral illumination correction, which automatically evens brightness across the image field, making an image of a blue sky even toned throughout, a function previously accomplished through post-processing software on a personal computer. Thanks largely to the DIGIC 4 processor, this automatic adjustment can be made in-camera during shooting with JPEG images or corrected in post-photoshoot processing with RAW images through Canon's Digital Photo Professional (DPP) software, which is supplied at no extra charge.

Helping to ensure each picture's subject is clearly visible, Canon's enhanced Auto Lighting Optimizer analyzes the brightness of subjects and automatically adjusts dark images so that they appear brighter, perfect for subjects in shade or in backlit situations. The Auto Lighting Optimizer on the EOS 50D Digital SLR camera has been updated not only to optimize images while they are being taken, but can also optimize images post-capture, during playback, to help ensure the subject of each image does not appear too dark. This is especially helpful when an amateur photographer uses the camera, because post-capture enhancement can help maximize image quality without the need of a computer.

A significant upgrade to the Canon EOS 50D camera is its large, clear 3.0-inch Clear View LCD screen which features 920,000 dot/VGA resolution, four times the pixel count of the EOS 40D camera's screen, for better clarity and color. To help show off those fantastic shots, the EOS 50D camera includes an HDMI (High-Definition Multimedia Interface) output to display crisp, clear images on a High-Definition TV. The EOS 50D recognizes the needs of today's photographers, and the faster processing speed of the DIGIC 4 processor helps support UDMA cards for faster writing of image files. 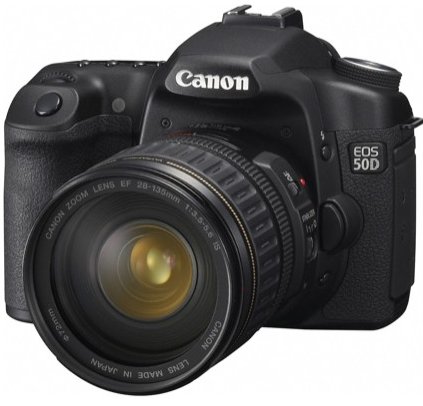