Posted on Wednesday, Aug 27 2008 @ 23:25 CEST by Thomas De Maesschalck
Gigabyte showed off a prototype of a Extreme Edition motherboard for Intel's Core i7 processor at NVISION. The special thing about this board is that it features support for up to six graphics cards; four PCIe Gen2 x16 slots and two wide-open Gen2 x4 slots.

This makes this motherboard pretty interesting for GPGPU parallel processing beasts, with the current graphics cards you'll be able to build a system around this motherboard that offers 6 teraFLOPS of computing power.

You could run up to 12 monitors, which should be a dream for any flight simulator enthusiast. While you can run up to four cards in Crossfire (graphics) mode, you can employ all six cards for GPGPU applications and floating point acceleration. The theoretical performance potential of such an environment would be in the 6 TFlops neighborhood for single-precision applications (double precision will cause the performance to drop by 80 – 90%.) To put this performance into perspective, consider the fact that Intel’s 1997 Pentium Pro supercomputer with 10,000 CPUs was rated at 1 TFlops.

The actual performance advantage of supercomputers is not entirely based on pure processing horsepower, but also memory capacity, which GPUs cannot match. But the simple thought that you can add six graphics cards with 4800 processors for about $1200 to rival the performance of supercomputers that cost billions of dollars a decade ago (at least in some applications) is stunning.

The motherboard will support up to 24GB of DDR3-1333, or 6GB of DDR3-1900/2000 memory and Gigabyte says special attention was paid to ensure "workstation-class stability under any conditions".

Here's a photo of the prototype but Gigabyte told the press that the board will undergo significant modifications to ensure six extended-length graphics cards can fit. 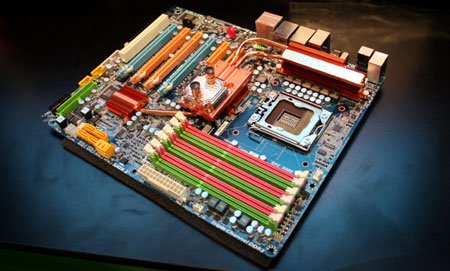