Posted on Thursday, Aug 28 2008 @ 01:02 CEST by Thomas De Maesschalck
Samsung announced it has begun sampling a higher-performance but low-density solid state disk for low-priced PCs. These drives will be available in capacities of 8GB, 16GB and 32GB. The latter one will be the most powerful, with a read speed of 90MB/s and write speed of 70MB/s. The 16GB model has a write speed of only 45MB/s and the 8GB model will have to do it with just 25MB/s.

With the introduction of these smaller, low-capacity SSDs, Samsung now offers an attractive replacement for existing hard drives used in low-cost PCs. Available in densities of 8GB, 16GB and 32GB, the new multi-level-cell SSDs will be mass produced beginning next month.

“We’ve refined our manufacturing techniques and redesigned our low-density SSDs to get what the low-priced PC market is looking for in the way of improved cost, performance and availability,” said Jim Elliott, Vice President, Memory Marketing, Samsung Semiconductor, Inc.

The low-density Samsung SSDs use the same high-performance SATA II controller technology as that being used on Samsung’s just-introduced MLC-based 128GB SSD.

Samsung incorporates four individual 16 gigabit (Gb) MLC NAND chips in its 8GB SSD, as well as four dual-die packages and four quad-die packages of 16Gb NAND for its 16GB and 32GB SSDs respectively. Furthermore, by including a 32MB DRAM as the buffer and four-channel system for the new low-density SSDs, these solutions are better suited for high-speed reading environments. 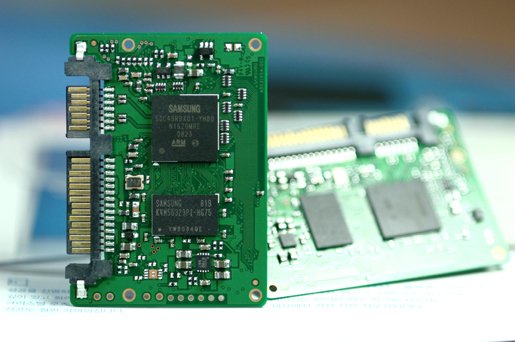