Posted on Friday, Aug 29 2008 @ 15:30 CEST by Thomas De Maesschalck
Fans of green computing will be excited about the new Tangent Evergreen 17" all-in-one PC - this new system promises a power consumption of only 24W!

The specifications aren't that great though but what do you expect from a system that uses so little power? You can choose between a passively cooled VIA Eden 1GHz CPU or a VIA C7 1.5GHz which is cooled by a low-noise fan. The chipset is the VIA CN400 + VIA VT8237R and graphics are provided by the integrated PCIe S3 Mirage. The system can be quipped by up to 2GB DDR2 SDRAM memory and a ATA hard drive of up to 160GB. There's also 10/100/1000Gbit Ethernet, 802.11a/b/g WiFi, one mini PCI expansion slot, four USB 2.0 ports, three serial ports, one VGA port, two PS/2 ports, one RJ45 port and audio ports (line-in, line-out, mic-in).

The system has a 17" LCD display with 1280 x 1024 pixel resolution and is powered by a 60W external PSU. A compact flash drive, SSD, DVD burner and touch screen are all optional. Users can choose between Windows XP Pro, Windows XP Embedded for servers and web-based computing or Linux.

The pricing is not attractive though, the Evergreen 17 has a starting price of $1,195. 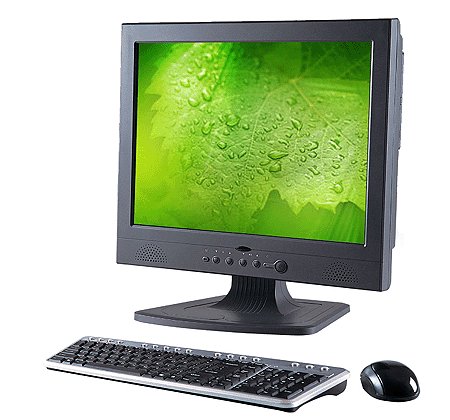