Posted on Thursday, Sep 18 2008 @ 05:22 CEST by Thomas De Maesschalck
Nexus recently showed of the FLC-3000 which is one of the first Core i7 compatible processor coolers. The HSF supports both Intel LGA775 and LGA1366 processor sockets, Hexus has a pic of how it's done:

The tilted cooler features four 6mm copper heat pipes at a 30-degree angle, a SkiveTek heatsink and a 92mm PWM-controlled fan attached to a series of ultra-thin fins. Trouble is, Nexus states that the cooler is compatible with socket LGA1366, LGA775 and AM2. Knowing that LGA1366 and LGA775 have heatsink mounting pins placed at different lengths, we wondered how Nexus had managed to get around the backward-compatibility problem.

Well, it turns out that it's even simpler than we thought. We'd guessed the cooler would ship with two different-sized mounting brackets, but Nexus has gone one better by making its existing LGA775 bracket slightly longer, allowing for LGA1366 holes to be added on the same piece of kit. 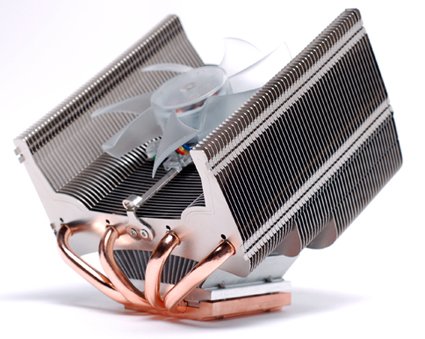