Posted on Friday, Sep 19 2008 @ 02:48 CEST by Thomas De Maesschalck
Techpowerup found an updated roadmap of AMD's plans for the chipset market. The slide unveil the AMD will add DDR3 support to the 790 FX and SB750 and relaunch the chips in the first half of 2009 because the RD890, RS880 and SB800 are all delayed and won't be out by the time that AMD's Socket AM3 processors should be available. Furthermore, the mainstream AMD 760G IGP chipset is also delayed.

Hence, AMD would be using the existing high-end duo of 790 FX and SB750 which would be re-launched in H1 2009 that support AM3 sockets. It is known that 790 FX supports HyperTransport 3.1 links that would offer processors system interconnect bandwidths of up to 6400 MT/s.

Another chipset that has been pushed to H1 2009 is the AMD 760G, which is a mainstream chipset with integrated graphics. It was expected that this would come out sometime in Q4 2008. 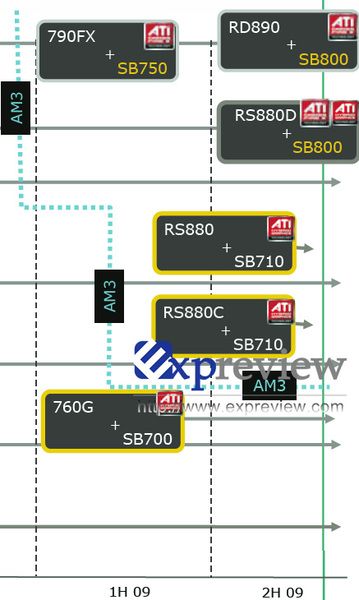