Posted on Wednesday, Dec 17 2008 @ 18:51 CET by Thomas De Maesschalck
Alright, this is the fourth and final post about NVIDIA's Ion platform today. Lots of information already trickled in earlier today and now AnandTech has published a three-page long overview of this new GeForce 9400M based platform for the Intel Atom processor.

It's a dual-chip solution (GeForce 9400M + Atom processor) that will enable PC makers to create systems that fit in the palm of your hand. The NVIDIA Ion platform uses one chip less than Intel's Atom platform, and is capable of playing 1080p HD video (8-25Mbps H.264). AnandTech saw a 18Mbps 1080p H.264 video playing on the reference design, video playback was smooth and the CPU utilization was just 27 percent.

The platform uses the same chipset as Apple uses in its new MacBook notebooks, NVIDIA claims the GeForce 9400M chip will deliver up to 10x faster graphics and video transcoding than Intel's 945G IGP. The power consumption of NVIDIA's Ion platform will be roughly the same as the Intel Atom + 945G, and the only drawback is that NVIDIA's solution will cost up to $50 more.

NVIDIA wasn’t able to leave us with an Ion system to test before today’s announcement, but we have seen it operational - it works and it’s tiny. NVIDIA’s vision for Ion extends far beyond netbooks and cheap PCs, systems based on Ion could easily be powerful HTPC front ends connecting to networked storage.

Let me also point out that since this is the same 9400M chipset we’ve reviewed, Ion has full support for 8-channel LPCM over HDMI. That’s even more capable than most ATX HTPCs. If you tossed a 500GB 2.5” HDD in one of these things, you could carry your HTPC with you. That’s probably a silly usage model but it highlights the power and versatility of this platform. Ion is cool.

More details at AnandTech. The first NVIDIA Ion based systems are expected in the first half of 2009. 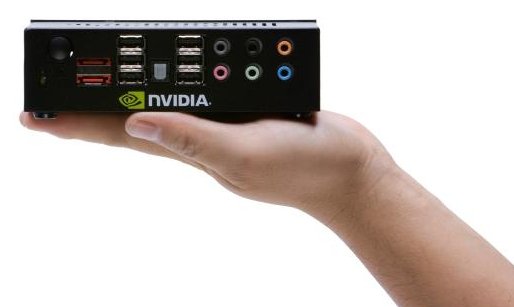