Posted on Wednesday, Apr 01 2009 @ 16:51 CEST by Thomas De Maesschalck
Some more details popped up about the upcoming Ion-based Acer Hornet nettop. Engadget received a 20-page document today with details and specifications of the Acer Hornet systems. Apparently there will be three SKUs; Standard, Deluxe and Media Center.

The Standard edition features the Intel Aom 230, 1GB DDR2 memory and a 80GB HDD. Keyboard and mouse are included, and the operating system is Windows Vista Basic. The features are pretty limited on this model but you have to keep in mind that this SKU is likely priced around $149.

Specs look more than decent for the targeted $149-$299 price range: the low end model pairs what sounds like an Atom N230 with 1GB of RAM and an 80GB drive preloaded with Vista Home Basic, while higher end models get 2GB of RAM, a 160GB drive, and a "Boxshell" quickboot OS in addition to Vista Home Premium. All this plus super-quiet sub-26dB operation and a slick diamond-shaped chassis designed to hang off the back of your flatscreen? We're potentially in love -- when you gonna make our dreams come true, Acer? Full spec chart after the break.

According to a report at DigiTimes, the Media Center edition which games woth motion-sending game controller will debut for $299 in China on April 8. 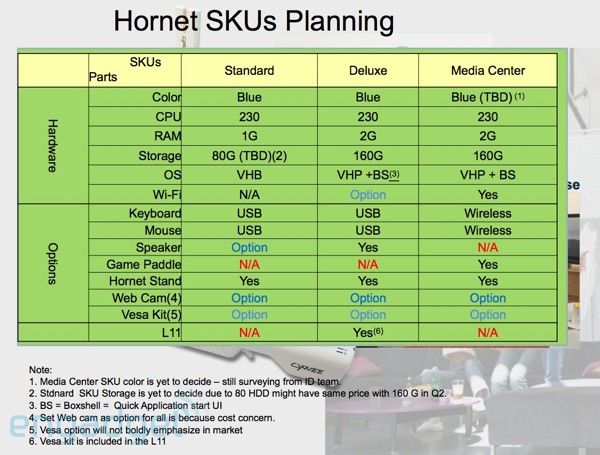