Posted on Wednesday, Apr 01 2009 @ 17:08 CEST by Thomas De Maesschalck
Super Talent announced the RAIDDrive, a new series of PCI Express solid state disks that offer up to 2TB of storage capacity. The Super Talent RAIDDrive will serve three market segments: the RAIDDrive ES is aimed at enterprise servers, the RAIDDrive WS is for workstation users and the RAIDDrive GS aims at gamers. The company says they'll ship the RAIDDrive with both SLC and MLC memory, the latter one is likely for the gamer edition.

These new SSDs use a PCI Express 2.0 x8 slot and will offer sequential read speeds of 1.2GB/s and sequential write speeds of up to 1.3GB/s. The RAIDDrive will also offer internal RAID5 for extra data protection. More performance details should be available in June.

RAIDDrives support up to 2 TB of MLC or SLC Nand Flash memories, have a turbocharged DRAM Cache, and the RAIDDrive ES is fully battery backed to protect data in the event of power loss. The RAIDDrives connect through a PCIe Gen. 2.0 x8 interface and are capable of delivering sequential Read speeds of up to 1.2GB/s, sequential Write speeds of up to 1.3GB/s. More performance details will be unveiled in June. As an optional feature users will be able to configure the drives with an internal RAID5 capability to deliver an extra level of data protection for mission critical applications. 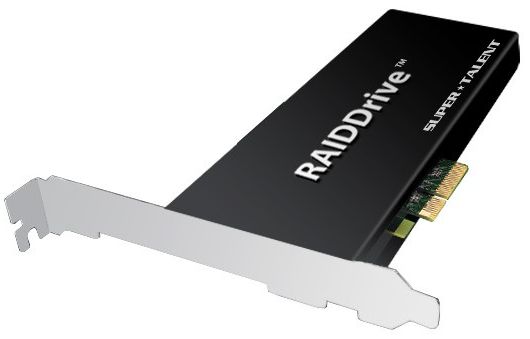