Posted on Friday, April 03 2009 @ 1:20 CEST by Thomas De Maesschalck
PC Perspective reports Intel has made the C++ Larrabee library prototype available to game developers last week. This piece of software is basically a Larrabee emulator that runs on the processor, it gives developers the chance to play with Larrabee without needing the actual hardware. More details over here.

In an interview for an Intel-developed magazine, the hardware and software architect behind Larrabee, Tom Forsyth, brought up a couple of interesting new points. First, it was revealed that the Larrabee architecture has been locked down for well over a year now - everything they are working on at this point is optimization in physical hardware design and on the software side. Forsyth also mentioned a couple of near-term features that Larrabee will offer the rasterization pipeline. They include render-target reads (shaders that can read and write the current target to enable more custom blends), demand-page texturing (ability to read from a texture when not all of it exists in memory) and order-independent translucency (allows translucent objects to be rendered just like any other surface type while the GPU does ordering for lighting effects, etc). These are features today that COULD be done with standard GPUs today but have inherent performance penalties for doing so. 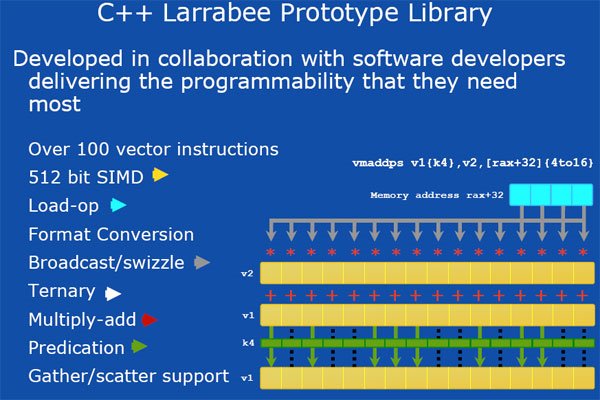