Posted on Monday, Apr 06 2009 @ 02:50 CEST by Thomas De Maesschalck
German tech site Netbooknews received a handful of slides that detail Dell's plans for the netbook market, you can check it out over here. The Dell Mini 10 will get several new options on April 17th and May 20th, and it appears there are several new 10" models on the way. On May 8th the PC builder is planning to debut the Inspiron Mini 10 "Bear", one slide says it will have a starting price of $299, while the other one states $329. This system is aimed for Internet applications and e-mail.

Somewhere in the second or third quarter of this year Dell will debut the Mini 1110 "Argos", this is a 11.6" netbook with a very thin and light design that promises laptop-like performance and keyboard. It has a 720p HD display option, up to 250GB HDD, up to 2GB DDR2 and Windos Vista. Starting price will be $499, according to the slide.

Also on Dell's roadmap are the 10.1" Samos and Samos+ netbooks, these will be based on the Intel Pinetrail and are expected in the third or fourth quarter of this year. These systems are still "future concepts" though. 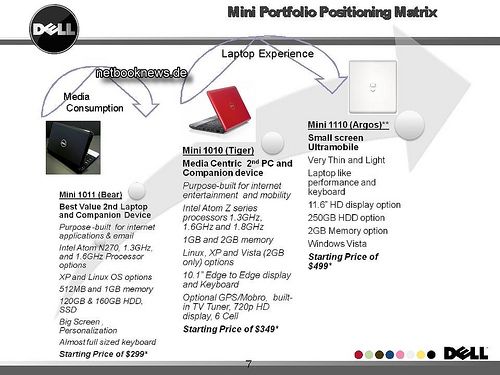