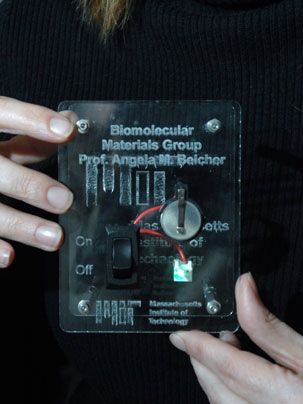 MIT researchers have demonstrated a li-ion battery with positively and negatively charged ends that were build by genetically engineered viruses:

The new virus-produced batteries have the same energy capacity and power performance as state-of-the-art rechargeable batteries being considered to power plug-in hybrid cars, and they could also be used to power a range of personal electronic devices, said Angela Belcher, the MIT materials scientist who led the research team.

The new batteries, described in the April 2 online edition of Science, could be manufactured with a cheap and environmentally benign process: The synthesis takes place at and below room temperature and requires no harmful organic solvents, and the materials that go into the battery are non-toxic.

In a traditional lithium-ion battery, lithium ions flow between a negatively charged anode, usually graphite, and the positively charged cathode, usually cobalt oxide or lithium iron phosphate. Three years ago, an MIT team led by Belcher reported that it had engineered viruses that could build an anode by coating themselves with cobalt oxide and gold and self-assembling to form a nanowire.