Posted on Wednesday, Apr 08 2009 @ 20:15 CEST by Thomas De Maesschalck
High-performance solid state storage device firm Fusion-io announced it has secured $47.5 million in funding. The company is known from the fast PCI Express based ioDrive and the more recent ioDrive Duo which delivers read speeds of up to 1500MB/s and write speeds of up to 1400MB/s.

The money will be used to accelerate the production of new products like the ioSAN, a PCI Express-based network solid state disk. Here's the full press release:

At Storage Networking World Spring 2009, Fusion-io announced today that it closed $47.5 million in Series B funding from a group of investors led by global venture capital firm Lightspeed Venture Partners.

The company also announced that David Bradford, a technology industry veteran, has been named CEO of Fusion-io. Mr. Bradford will lead the company’s strategic expansion, seizing the opportunity to help transform the corporate data centers of the world with Fusion-io's revolutionary solid state storage solutions. Fusion-io offers the first true fusion of high-performance I/O and network storage, replacing racks of storage disks with a single card that fits in the palm of your hand.

Fusion-io, recently voted the world’s No. 1 up-and-coming innovator in a BusinessWeek readers’ poll, is experiencing substantially increased momentum, adding hundreds of new customers with deployments across multiple industries. The company has also made a series of announcements regarding OEM and working agreements with HP, IBM and Dell.

Series B Funding
In addition to Lightspeed Venture, Series A investors, including New Enterprise Associates (NEA), Dell Ventures and Sumitomo Ventures, have returned for the Series B round.

“In just over a year, this company has demonstrated through its ground-breaking product offerings that it has the potential to change the way enterprise organizations think about storage,” said Scott Sandell, general partner at NEA. “This round of funding will enable Fusion-io to build on that momentum and help the company keep pace with the growth demands of the marketplace, while permitting them to continue leading the evolution of network storage.”

Fusion-io will use the Series B funding to significantly increase production capabilities to meet the rapidly growing demand for Fusion-io’s current offerings. It will also use the investment to develop the next generation of Fusion-io technologies that will build on its industry-leading server-attached storage products to supply server-deployed, network-attached solid-state storage. The first of these products, releasing this summer, is the ioSAN. The ioSAN is a PCI Express-based product that extends the raw power of Fusion-io’s solid-state technology across the network.

“World-class funding sources recognize the potential in Fusion-io’s vision for the future of storage,” said David Bradford, the new CEO of Fusion-io. “Especially given the current world economy, their faith in our vision is humbling. Our intent is to exceed their expectations by becoming the leader for a whole new generation of enterprise storage technology.”

New Leadership
In preparation for Series B funding, industry veteran and respected executive David Bradford has taken the helm. Mr. Bradford brings 30 years of experience to Fusion-io, including 15 years at the networking software giant Novell, Inc. As a senior Novell executive, he helped lead the company from startup status through a series of acquisitions, public offerings and global business development activities to its position as a multi-billion dollar corporation. During his last three years at Novell, he reported directly to the CEO, Eric Schmidt.

“I am delighted to hear that David Bradford has been appointed CEO of Fusion-io,” said Dr. Schmidt, now the CEO of Google. “I have great confidence in his ability to lead this innovative company.”

In addition to his extensive industry experience, Mr. Bradford also brings his wide network of industry relationships to the company; for example, he recently played a key role in bringing Steve Wozniak, inventor of the Apple Computer, to join Fusion-io as its chief scientist.

Continued Momentum
The company continues to experience hyper-growth, adding hundreds of new customers in multiple industries, with deployments that store up to tens of terabytes. Significant achievements include establishing OEM and working relationships with some of the industry’s largest server vendors. Fusion-io is also collaborating closely with Samsung, Mellanox and other leading technology providers as it works to redefine network-attached storage.

Fusion-io’s first product, the ioDrive, has been declared the world’s fastest storage technology by several independent testing organizations, including Tom’s Hardware and TweakTown. Market demand for the ioDrive, which began high, has continued to increase. Fusion-io’s second product, the ioDrive Duo, which doubles the performance capacity of the original ioDrive, has also been met with great industry enthusiasm. Recently, HP and Fusion-io worked together on a server that used flash technology and became the first ever to achieve more than one million transactions from a single server, a feat that would take well over 1,000 traditional hard disk drives in today’s disk-based performance solutions.

The analyst firm Gartner has named Fusion-io among its Cool Vendors in Storage Technology 2009. The company has also won several other awards, including awards from IDG, Red Herring and BusinessWeek. 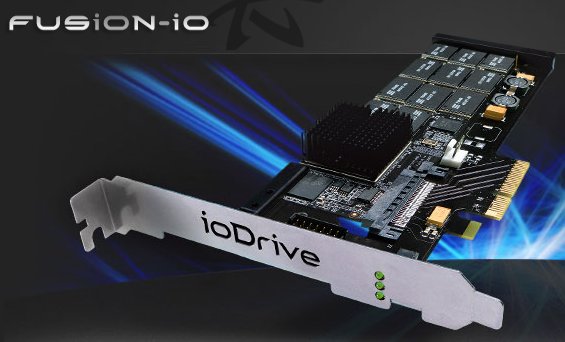