Microsoft is really stepping on Apple's toes these days. Many Mac fans have scowled at Microsoft after seeing one of those Laptop Hunters ads, and now the software giant is getting under Apple's nails again by bringing out a sponsored whitepaper from Roger Kay of Endpoint Technologies Associates that looks at the "Apple Tax".

Microsoft blogger Brandon LeBlanc used figures from the whitepaper to conclude that a family that chooses two Windows PCs over two Apple Mac systems in a 5-year period saves $3,367. LeBlanc claims Mac hardware is significantly more expensive than regular PC hardware, and that support and upgrades on the Mac platform also cost a lot more. More details at The Windows Blog.

Microsoft sponsored a new whitepaper (PDF) from Roger Kay of Endpoint Technologies Associates which takes a look at the tax from a tech analyst’s viewpoint. His paper shows the “Apple Tax” is the combination of what people pay up front when purchasing a Mac and what people pay over the life of their computer – the hidden tax.

Roger looked into both aspects in his whitepaper, and has discovered some interesting findings around the “hidden tax” of owning a Mac – using the scenario of a hypothetical family of 4 and their costs over a five year period. Knowing that Tax Day is just around the corner here in the US (April 15), I decided to have a little fun with his findings by building a mock up tax form using Roger’s numbers that show the whopping difference this family would get purchasing Windows PCs over Macs: $3,367. 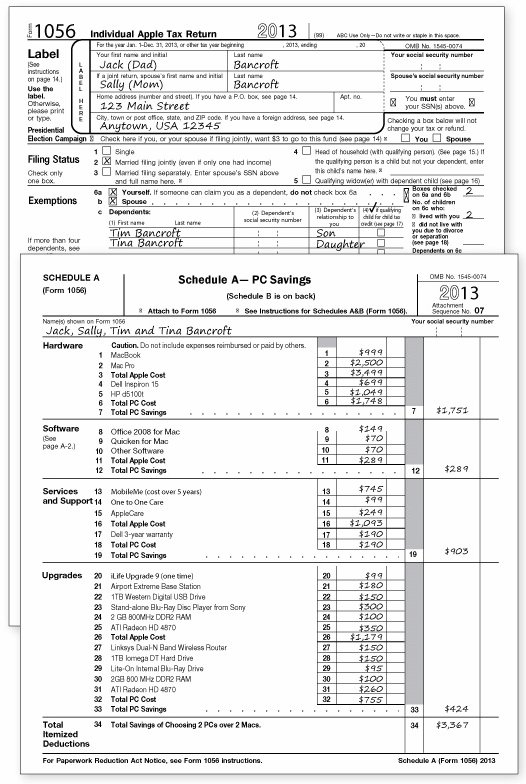