Google shares details about its servers

Posted on Saturday, Apr 11 2009 @ 13:03 CEST by Thomas De Maesschalck
CNET reports Google has for the first time revealed details about its servers at the Google Data Center Efficiency Summit last week. You can read all the details at this page. Unlike other companies, Google has hundreds of thousands of servers that use a design that was developed in-house. One of the surprising aspects for instance is that each server has its own 12V battery, the search engine giant found this is much more efficient and economical than having a large UPS.

Ben Jai, who designed many of Google's servers, unveiled a modern Google server before the hungry eyes of a technically sophisticated audience.

Google's big surprise: each server has its own 12-volt battery to supply power if there's a problem with the main source of electricity. The company also revealed for the first time that since 2005, its data centers have been composed of standard shipping containers--each with 1,160 servers and a power consumption that can reach 250 kilowatts.

It may sound geeky, but a number of attendees--the kind of folks who run data centers packed with thousands of servers for a living--were surprised not only by Google's built-in battery approach, but by the fact that the company has kept it secret for years. Jai said in an interview that Google has been using the design since 2005 and now is in its sixth or seventh generation of design.

Here's a look at the design of a Google server: 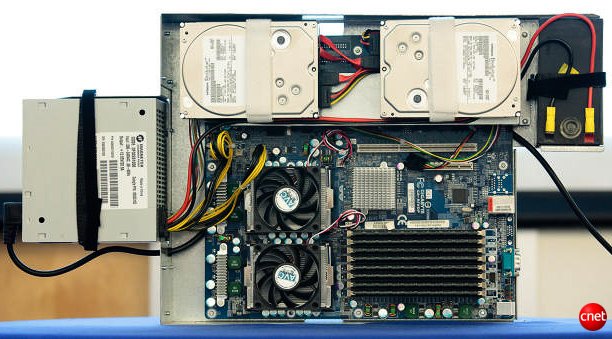