Posted on Wednesday, Apr 15 2009 @ 15:47 CEST by Thomas De Maesschalck
VR Zone published several marketing slides from AMD about the upcoming Radeon HD 4770 graphics card which will be released next month. It's the first 40nm graphics card, it will feature 826 million transistors and a computing power of 960 gigaFLOPS. The card has 640 stream processors, 128-bit memory bus, 750MHz core and 512MB GDDR5 memory clocked at 3200MHz. The TDP is 80W and AMD claims the card has much more computing power and better performance per Watt and dollar than the GeForce 9800 GT. You can expect the card in May for $99. 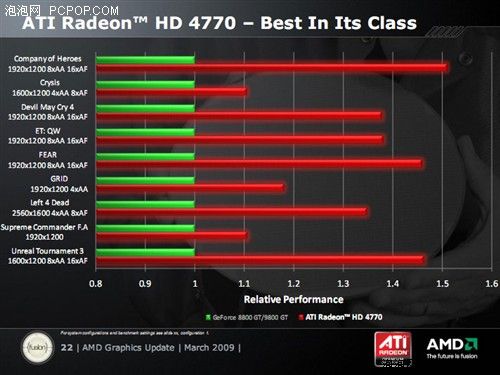