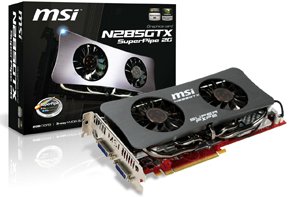 Twin Frozr thermal design
The N285GTX SuperPipe 2G uses MSI all new Twin Frozr thermal design, which features an intelligent dual-PWM fan design that changes speed with the GPU’s temperature and load to keep it cool. During idle condition, the card remains almost silent, and even when the card is running 3D games, the Twin Frozr design remains quiet while efficiently eliminating the heat of GPU. The dual-fan design also offers twice the cooling efficiency and protects from any single fan failing that makes the system malfunctioned due to overheating.

Additionally, Twin Frozr cooling system uses an industry leading 5-heatpipe design that outperforms other two – four pipe designs by greatly increasing the speed of the heat flow. This design spreads the heat out through the heatpipes to the fins, and then dual fan system quickly carries the heat away.

2GB memory – Push your game settings to the max
More and more DirectX® 10 games are offering ever more realistic environments to gamers who are demanding the absolute best visual effect which requires much more video memory than reference design. For example, recently the hottest game, Grand Theft Auto IV (GTA4), requires 1.5 GB of graphics memory to run smoothly with turning on its special effects to maximum.

MSI builds upon its recent N260GTX Lightning which has 1792 MB of video memory, and will attract even more positive attention from the media and markets with the N285GTX SuperPipe 2G series which double memory to a whopping 2GB. MSI N285GTX SuperPipe 2G sports the most video memory in its class, and is sure to satisfy gamers’ desire for high quality and blazing fast performance.