Windows bloggers Rafael Rivera and Paul Thurrott unveil Windows 7 will have a special compatibility feature for old applications, the new operating system will feature a virtualized version of Windows XP that will enable users to run Windows XP-based applications alongside Windows 7 applications under a single desktop. The XP Mode (XPM) will consist of a Virtual PC environment with a fully licensed copy of Windows XP with SP3, it will be available as a free download to users of Windows 7 Professional, Enterprise, and Ultimate editions.

XP Mode consists of the Virtual PC-based virtual environment and a fully licensed copy of Windows XP with Service Pack 3 (SP3). It will be made available, for free, to users of Windows 7 Professional, Enterprise, and Ultimate editions via a download from the Microsoft web site. (That is, it will not be included in the box with Windows 7, but is considered an out-of-band update, like Windows Live Essentials.) XPM works much like today's Virtual PC products, but with one important exception: As with the enterprise-based MED-V (Microsoft Enterprise Desktop Virtualization) product, XPM does not require you to run the virtual environment as a separate Windows desktop. Instead, as you install applications inside the virtual XP environment, they are published to the host (Windows 7) OS as well. (With shortcuts placed in the Start Menu.) That way, users can run Windows XP-based applications (like IE 6) alongside Windows 7 applications under a single desktop.

Below is a screenshot of Windows XP Mode running Word 2003 under XP and Word 2007 under Windows 7: 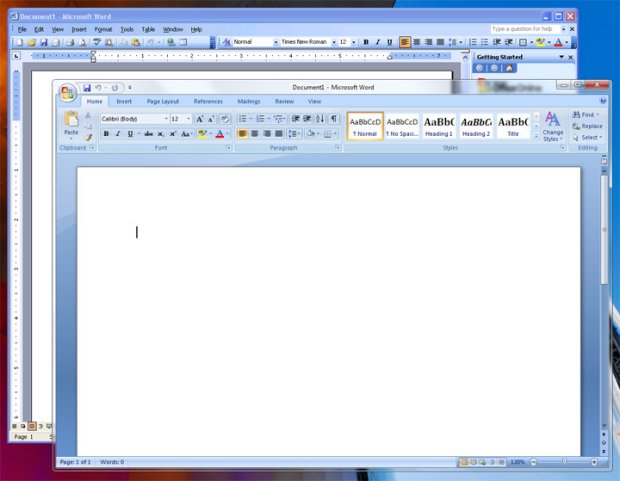