ASUS, the world's leading producer and innovator of motherboards, today shed brilliant light on the dark art of overclocking with the introduction of the ROG (Republic of Gamers) OC Station. The OC Station is a pure hardware-based, bay-mounted device with a large 3-inch display that takes OCing to a whole new level of ease, accuracy and sophistication. When used in conjunction with ROG motherboards, the strikingly-designed OC Station grants users on-the-fly access to overclocking parameters, ROG-exclusive features, fan speeds, system information and even a photo slideshow function.

The Holy Grail of Overclocking: Instant Hardware-based OCing
With the OC Station, ASUS has stamped its authority on an area that has proven elusive to other PC component manufacturers—pure hardware-based overclocking. The OC Station provides users with quick access to system voltages and frequencies without having to enter the BIOS. Users can overclock their systems on-the-fly via a knob, even during busy benchmark runs or actual gameplay. The OC Station also interfaces seamlessly with the embedded iROG controller on ROG motherboards, enabling users to manage ROG-exclusive features such as CPU Level Up and ASUS EPU-6 Engine at a hardware level. This allows users to achieve performance boosts and perform energy consumption tweaks instantly.

Clearly Intuitive: Large LCD, Adjustable Faceplate and User-friendly Interface
The OC Station's large 3-inch display makes reviewing the system's settings a breeze. Characters are bright and large, making them easily readable from a good distance, and an adjustable faceplate which can be tilted upward 30 degrees ensures perfect viewability while sitting down or standing. Similarly, the OC Station's user-friendly interface—consisting of a large knob and clearly-labeled buttons—makes navigating through its comprehensive functions an effortless affair.

Dynamically Designed: Space-age Aesthetics
Bold and futuristic, the OC Station's sports car-inspired design is a reflection of its value proposition: control, speed, precision and power. It is easily the most stylish OC controller on the market, a gleaming testament of ASUS' belief that cutting-edge function should come in a cutting-edge form. The OC Station can be installed in virtually any PC case, where it occupies two 5.25-inch drive bays. 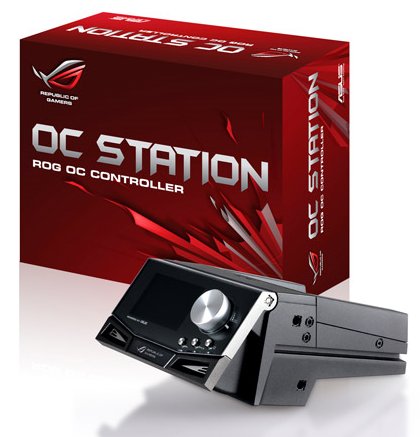