Posted on Wednesday, Aug 05 2009 @ 16:12 CEST by Thomas De Maesschalck
Tuniq has introduced the Tower 120 Extreme processor cooler, this large tower heatsink features five direct-touch heatpipes and wave-like aluminum fins that are cooled by a silent 120mm blue LED fan that is positioned in the center of the heatsink. The heatsink measures 131mm x 112.31mm x 150.7mm (L x W x H) and weighs 775g without fan. The included fan promises to deliver up to 90.65CFM of airflow at a noise level of just 16-20dBA.

The performance king has returned! The much praised Tuniq Tower 120 has gone through a radical redesign and not only looks cooler but its performance has been boosted. The unique wave-like fins display a tremendous visual impact and increase the air-contact area for an unprecedented thermal performance. The nickel-plated surface combined with the LED fan creates a breath taking visual effect!

To ensure that the maximum cooling performance is obtained, we have also included our highest performing thermal compound, the TX-3. Furthermore, our unique adjustable fan controller places the control in your hands! 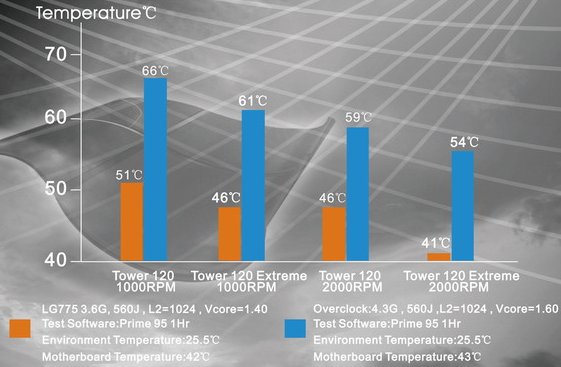