Posted on Monday, Aug 17 2009 @ 16:22 CEST by Thomas De Maesschalck
TPU found some photos of the ASUS AT3N7A-I A330 motherboard, this ION-based mainboard features the Intel Atom 330 1.6GHz processor and has two DDR2 memory slots that support dual-channel DDR2-800 memory. The ASUS AT3N7A-I A330 is expected to be available later this month for around 112EUR.

Located at the center of the board is a big, fan-heatsink that is common to the chipset and CPU. The chipset embeds GeForce 9400M mGPU, which connects to its displays using D-Sub and HDMI. Storage is care of three SATA II ports with RAID 0, 1, 5, JBOD support. The lone expansion slot is a PCI. Connectivity options on this board include gigabit Ethernet, Bluetooth, eSATA, and ten USB 2.0 ports in all. Audio is handled by a VIA 8-channel HDA codec that also provides optical and co-axial SPDIF outputs. 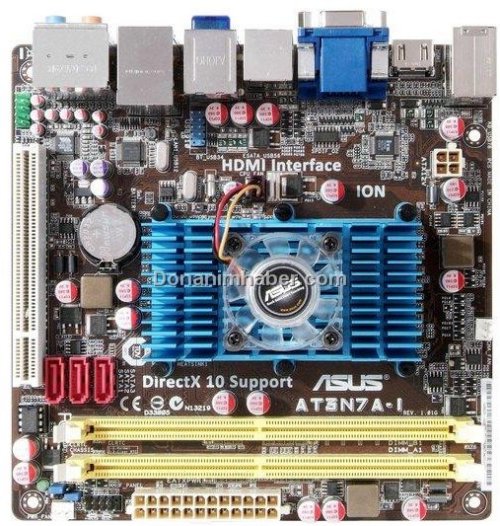