Posted on Sunday, Aug 23 2009 @ 18:54 CEST by Thomas De Maesschalck
ASUS was showcasing its R.O.G. MARS graphics card at the ESL Intel ASUS gamezone booth at Gamescom in Cologne. This graphics card is limited to only 1,000 units and at 1,099EUR (approx. $1,575) it's not only the fastest but also the most expensive consumer graphics card in the world.

All MARS graphics cards are numbered, the one shown off at Gamescom was number 2 of 1,000. 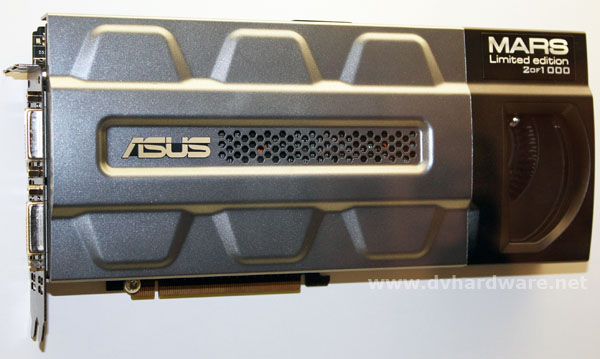 The ASUS MARS is expected to be available before the end of August, together with the 349EUR R.O.G. MATRIX GTX 285. This overclocked card features a 662MHz core (669MHz in Gamer Mode), 1476MHz shaders (1512MHz in Gamer Mode) and 1GB GDDR3 memory at 2484MHz. ASUS says this card is 15 percent less noisy than standard GeForce GTX 285 cards and 12 percent more efficient at heat dissipation.