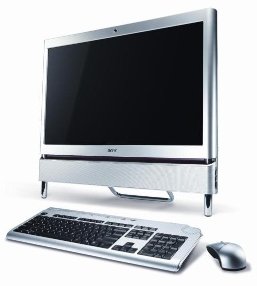 The combination of style, top-of-the-line desktop components and touch technology make this PC a powerful entertainment hub for the home. Inspired by high-end digital entertainment, the Aspire Z5610 is an elegant PC that bridges the gap between traditional desktops and monitors. A seamless integration of a desktop PC with the usability of a multi-touch LCD display, it’s an easy fit for any living room, den or office.

Designed as a timeless piece, the Z5610 boasts simple purposeful details such as an illuminated strip between the LCD and sound bar, which helps users see the keyboard in a darkened environment. The system’s clean and simple lines emphasize the ease and simplicity of the user’s PC experience. Elevated by two chrome legs, users can discretely stow away the keyboard under the desktop to further free up workspace and maximize the system’s multi-touch capabilities.