Posted on Thursday, Oct 29 2009 @ 17:16 CET by Thomas De Maesschalck
NVIDIA shares its vision of an ExaScale Machine in 2017. According to NVIDIA Chief Scientist Bill Dally a supercomputer with a computing power of two exaflops will have a TDP of 10MW. It consists of 128 cabinets that feature 384 nodes each. Each node is expected to feature 2,400 GPU cores, 16 CPUs, 128GB DRAM and 512GB Phase-change/Flash memory. The slide claims every node will deliver 40 teraflops of single-precision computing power and 13 teraflops of double-precision computing power, while consume around 300W of power. 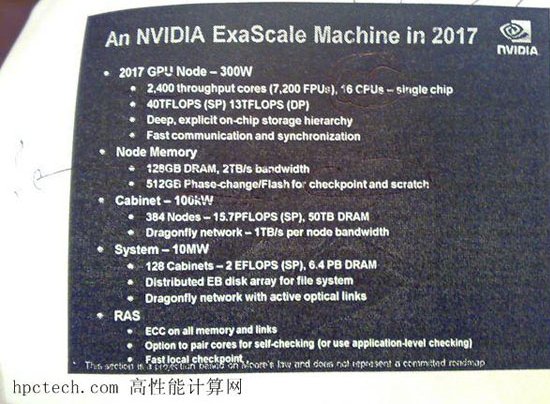