Posted on Thursday, July 22 2010 @ 18:02 CEST by Thomas De Maesschalck
Razer collaborates with Disney to deliver TRON themed gaming keyboards and mice. These products are expected to be available in Q4 2010, here's the full press release with all the details:

Razer, the world’s leading manufacturer of high-end precision gaming and lifestyle peripherals, is pleased to announce, in collaboration with Disney Consumer Products (DCP), the TRON:Legacy -themed TRON® Gaming Keyboard Designed by Razer™, TRON® Gaming Mouse Designed by Razer™, and the exclusive bundle with TRON® Gaming Mouse and Mouse Mat Designed by Razer™ all incorporating the distinctive blue glow and custom features inspired by the upcoming Disney film TRON: Legacy, releasing Dec. 17, 2010 in Disney Digital 3D™ and IMAX® 3D, and compatible with TRON: Evolution the video game. Together with Disney, Razer is offering gamers and TRON fans alike a set of definitive gaming peripherals to get the true TRON experience.

“We are all extremely excited about our collaboration with Disney on a line of high-end gaming peripherals inspired by the upcoming film TRON: Legacy,” said Robert “Razerguy” Krakoff, president, Razer USA. “Razer is known for our highly detailed finishes and lighting effects, so as soon as we viewed footage from TRON: Legacy, we were immediately inspired. Then, we started working to take it to the next level, as only Razer can, with a keyboard and mouse that has digitized sound effects and lighting built into it for the ultimate gaming experience.”

Each TRON: Legacy product Designed by Razer™ features a luminescent blue glow that is reminiscent of the film aesthetic. Whether it’s the keyboard with a detachable modular keypad or the illuminated mouse, gamers will feel as if they’ve been enveloped by the TRON universe and pulled into a digital world.

TRON Gaming Keyboard Designed by Razer
Prepare to lay programs and fellow users to waste with the precision of a Light Cycle carving a jetwall. From the Rez and De-Rez lighting effects during start-up and shutdown to the smooth black finish of the Hyperesponse™ keys, the TRON Gaming Keyboardis exactly what you need to dominate the game Grid. A detachable modular keypad, lighting effects triggered by in-game actions, and fully programmable keys with macro capabilities make this a must for any TRON fan.

The TRON Gaming Mouse Designed by Razer
The TRON Gaming Mouse comes in an ambidextrous design with a luminescent blue glow protruding from sleek edges and lines. Designed for the upcoming TRON: Evolution game and inspired by the Light Cycle featured in the film, the mouse creates light alerts based on your in-game actions, thrusting you into the TRON universe. The unique effects upon start-up and shutdown complete the immersive TRON feel. With a 5600dpi 3.5g laser sensor, the TRON Gaming Mouse gives gamers tournament grade precision while they defeat characters in the TRON: Evolution game. Gamers can now enjoy a mouse that goes beyond appealing looks and design, and gives them functionality. 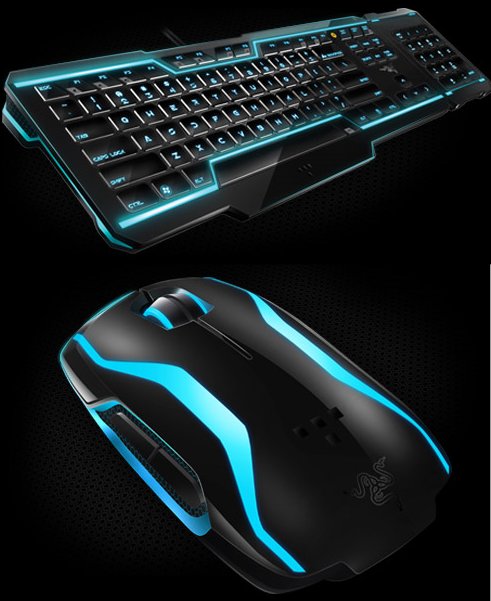