AMD and Intel gain marketshare at expense of NVIDIA

Posted on Monday, Aug 02 2010 @ 21:00 CEST by Thomas De Maesschalck
Jon Peddie Research released its graphics shipment marketshare report for Q2 2010. The company's analysts estimate overall GPU shipments were up four percent from Q1 2010, while shipments of discrete graphics card for desktops fell 21.4 percent due to tremendous growth in laptops. For the first half of 2010, shipments are 38.6 percent higher than the same period last year.

In terms of marketshare there were some major shifts, AMD and Intel saw big gains, while NVIDIA's marketshare collapsed to 19.7 percent from 28 percent in Q1 2010. Things have been pretty rough for NVIDIA in recent months, the company's GPU shipments declined by 26.6 percent quarter-over-quarter and NVDA shares lost more than half of their value since the beginning of 2010. Here's a piece from JPR's press release:

Clarksdale, continued Atom sales for Netbooks, and strong notebook growth helped Intel maintain its leadership position in unit shipments for Q2’10. AMD led the market with the biggest gains for both discrete and integrated desktop products in the company’s history. On a quarter-to-quarter basis Nvidia had double-digit losses in every segment except notebook integrated where they showed a 10% gain in units shipments from last quarter.

Intel reported “revenue from client chipset and other” of $1.68 billion in Q2.

Nvidia’s fiscal quarter, straddles the calendar quarters. Their next quarter ends in July 31. Total revenue is now estimated at $800 million to $820 million, compared with the range of $950 million to $970 million provided on May 13, 2010.

The revenue shortfall occurred primarily in the consumer GPU business, resulting from increased memory costs and economic weakness in Europe and China. The increased solution cost of discrete GPUs led to a greater-than-expected shift to lower-priced GPUs and PCs with integrated graphics. 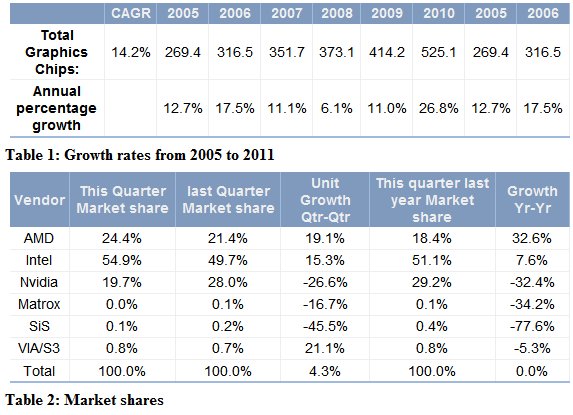